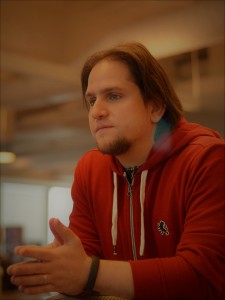 My father’s spirits walked me across in 1979. The gateway still exists today, buried deep under the sand behind a lemonade stand, crumbling toward time. Humanity received me in an island city named after a Spanish conquistador. Ponce de Leon’s curiosity lingered in the oxygen, propelling my childhood to a life of exploration, experimentation and at the center: A good story.

Racing imaginary friends up the two-story high mango trees in grandma’s backyard. Tinkering with broken electronics laid sprawled on the cement floor. Programming ancient computers in the den while whistling the Back to the Future theme. Hands-on hobbies always reigned at the Chardon House. The media fed us spacefaring 80s, radical and robotic 90s and the occasional  fantastical kingdom. Throw in 12 years of old-fashioned Catholic schooling at Academia Santa María and the Republic of Alvin began to crack. To this day, my diplomats still discuss the juxtaposition of Noah and Darwin over plantain chips and rum, stooped over miniature tables and ganglion chairs. I didn’t entirely crack… I think.

University of Puerto Rico Mayagüez admitted me in 1997, a poet still thirsty. Curiosity carried the prose, fueling my imagination with the relentless pursuit of our spiritual Truth inside science. I didn’t find it. El Colegio spit me out a pragmatist, holding two degrees in Electrical and Computer Engineering, and I must confess, algorithms didn’t charm me on the first date.

Don’t pout, Microsoft. Meeting a new craft with denial and disarray is normal. I truly do love my job. I do. The coding gene evolved and this humble simian professionally reviewed two software books in the arts of C# and C++ circa 2007. One New England colleague even screamed I’m wicked pissah at it too. The tech-curious can read about a decade of Microsoft adventures on Linked In.

This blog is about writing.

I wrote a novel, maybe three, to scratch my soul and prove I own the ethereal apparatus. I do not call myself a novelist. Not until NATURAL SELECTION, BOOK 1 of my young adult dark fantasy series CONCEPTION is published. I do indulge the delusion of thinking myself a storyteller.

Stories exist in everything we do. From slurring a pitch to Bill Gates over burgers and wine (and not remembering the topic 10 minutes later); to witnessing your dead great-grandfather, Luis, equip your winter jacket and grab the other shovel. A select few are special. And the special ones carry the gift. For me, realizing mortal life is not always the will of the gods was a hell-of-a gift.

Yes, life’s lemonade tastes bitter, at times downright rancid, but I prefer my citrus concoctions with a pH > 2. I did what great engineers before me did: Fail. And after failure, enjoy a sugary drink, reboot and try again.

I finished that novel. I challenged the gods. And I’ll explain why and how in this,

My House of Words.

For now, I unclench a quote borrowed from my characters to describe the journey:

“I created it… a new World of stolen life, built from your words and mine. Imagined from our dreams and aspirations, crafted with our visions and lack thereof. I made it with light and with darkness, with our children’s smiles and screams and nightmares. I designed it to last, and to not exist at all. And with your unearthly essence, I will power it.”
-The Engineer

Grab that extra chair behind the stand. The Truth is somewhere. We will find it. Be warned: my umbrella is old and rusty. The wind will blow and you may feel a little cold.

One thought on “Hello World, my name is Alvin.”